So I hurt myself playing with the big kids again.

I joined a grading class last weekend, Andrew was going for his orange belt (coach uses the kids system to give adult white belts ‘stepping stones’), lots of the blue belts were there to give him a tough rolling session, we drilled while he went through the techniques he had to know, then he got me for some scrambly white belt relief!

I felt a lower back twinge and hobbled off straight after class to get a massage. I have had three bulging discs in the past (not jits-related) so am very wary when I get back pain in BJJ.

Thankfully it’s not very often. But it’s also the reason why I hate being stacked – I freak out about my back and pretty much let my training partner pass straight away to avoid the pressure/potential injury. Not great, I know.

I haven’t trained all week – I haven’t exercised all week actually except for a big walk. Shame on me.

To be honest the motivation died pre-injury though, when the local Gi comp I entered got cancelled due to the organiser being unable to pull it all together.

But tomorrow I get back on the BJJ train. Sophia Drysdale (old interview, I believe she has 2 kids now!), Australia’s first female Black Belt is holding a seminar at Dominance, so with a week of rest behind me I’m hoping I can participate without much pain, and learn a new thing or two.

Just being around some of the incredible AGIG crew should get me back on track.

** I have been told to ask Sophia tomorrow, but as it’s my first seminar and I’ll probably be sitting out some bits, I’m wondering what the general rules are when it comes to note taking, photo and video recording? Can anyone enlighten? 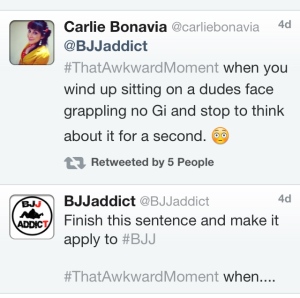 I don’t think about these things on the mat a lot – most of the time I’m too busy defending myself from every angle to be very aware of what possibly odd-looking positions I’m getting myself into with dudes.

But there are those occasional moments when I DO think about it – and wonder at what point in my BJJ training did I become okay with virtual strangers sweating all over me, straddling me, pinning me to the ground and choking me out with their thighs? (not necessarily always in that order)

Some of my male teammates I’m pretty sure I had a bit of (clothed, obvs) crotch-to-face action with before we’d even had a proper conversation!

It’s funny how a fart on a mat can create awkwardness and clear out a space for a few minutes … but a tough roll between a guy and a girl in no gi, getting super up close and personal – no one including the participants bats an eyelid at.

A great reflection of the equality in the sport, mind you.

I have been single throughout my BJJ journey to date, so it hasn’t been an issue – but I do wonder if my next romantic interest will have a problem with my  hobby.

Are you in a relationship with someone who doesn’t train jits? How do they feel about you rolling about and accidentally kneeing the privates of sweaty men and women on a regular basis?

And I’d love to read YOUR awkward moment stories!

I am yet to enter my first Gi comp. I should, I know – but a combination of things have stopped me to date.

– I hadn’t been training much in Gi, working more No Gi instead for upcoming comps.

– I haven’t felt as ‘in control’ in Gi – all these grips that render me useless and find me tapping from chokes I never saw or felt coming!

The last one I’m only just getting my head around. At the last Gi round robin (where I spectated and thought later, ‘I should have entered’) I overheard a girl talking to her teammates about how their game plans were coming together nicely and really working for them, great implementation of their game plans etc.

What on earth is this game plan and how do I get one?!

I really didn’t know where to start.

I’m thinking about entering the Synergy Pro or a local comp coming up at Melbourne Uni – they’re not far away, and I haven’t been training super consistently, but I want to do one .. just to throw myself into another comp asap.

So I mentioned it on Twitter, and got tweeting @JiuJitsuJournal who has written this great post – exactly what I need to begin.

Also not to give up, see it as winning or learning.. not losing, everyone’s journey is different, go at your own pace, keep it playful.

So from now on, that is what I’m going to do. Doing already actually, though starting tonight by joining a comp rounds sesh with blue belts may have been a bit ambitious!

I cried a bit (what is WITH that?), got hurt a bit, frustrated, made the usual scrambly and silly white belt mistakes.

But I’m actively going in to every class from now on with an overall personal goal (eg. keep your balance tonight, be faster, more aggressive or keep those damn elbows in!) that I hope will see me keep my cool more, and lose it less.

** By the way yup I’m a newbie blogger, still setting up my page, so apologies for the work in progress.

I’m also keen to add other BJJ blogs to my reader, so please recommend. =)