I scheduled my flight to London via the Thai capital to see the lovely Marissa, who has moved there for work. I can honestly say Bangkok would not have been on my radar otherwise.

Rather than rush around doing the touristy thing I made no plans, there more to hang out with my friend and relax. In hindsight a few things I should have pre planned, like an empty suitcase for all the cheap shopping and tailor made clothes!

But I had a great time getting to know Marissa’s bustling neighbourhood in the embassy district, window shopping in Siam, having a spa treatment, riding the incredibly efficient BTS (skytrain) – mustering the courage to take a short ride on the back of a scooter (yes I’m a scaredy cat) and of course a spin in a tuk tuk, which I thought was definitely going to tip over the way we were screaming around corners at 1am! 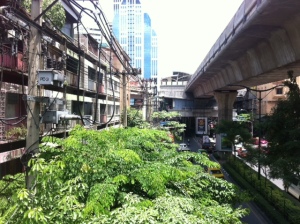 Watching Muay Thai fights at Lumpinee Boxing Stadium is a great experience, not just for what’s going on in the ring but it’s one of the few places in Thailand where gambling and betting is allowed – so there’s a lot of action in the stands.

Being driven from the airport by a drunk cabbie – not such a great experience, truly I don’t know how we weren’t involved in a crash with another car – or the concrete freeway barriers.

There are many hilarious, sober tuk tuk and taxi drivers in Bangkok though … like “Mr Big” who earnestly revealed he’s gay while showing us posters, physical photos and snaps on a digital camera, all while navigating Friday night traffic and trying to pitch himself as our personal city guide. (For the record, checked out Khao San Road but no ping pong shows!)

I hadn’t even planned to do a BJJ class during my extended stopover, but on a whim I hit google and found Bangkok Brazilian Jiu Jitsu Academy was only one BTS stop from where I was staying.

Located in the Trendy Building on Sukhumvit Soy 13, the hardest part was finding the Soi (street) as it wasn’t signed. A few extremely friendly locals pointed me in the right direction.

Pat Aphaisuwan took the 7am class – a small turnout that Friday (I think other regulars had a late one the night before) of mostly western dudes, but I’m told a few women also train at the club.

Warm ups, live takedowns, Pat demonstrated some handy back escapes before ending the one and a half hour session with comp rounds. 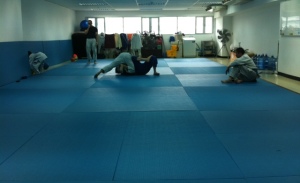 He says they get travellers passing through quite regularly – my one-off class cost 500 Baht (about $17 Australian) and I believe they have pricing plans for short term training periods.

No shower inside the Academy, though Pat says they’re building one – and there are ladies and men’s toilets on the same floor, so somewhere to go to change/freshen up after training.

A really friendly academy that is worth a visit, if you ever find yourself in Bangkok.

An Aussie in Alsace, trying to be braver in jiu jitsu and life in general. View all posts by gypsy girl